Finally Revealed! The Book of Wealth Has Been Kept Hidden From
The General Public For Over A Century. This 10 Volume Set
Literally Cracks Open The Code To Eternal Wealth -
Once Owned ONLY By The 400 Wealthiest Families In The World!
Now Available For YOU To Instantly Download!

Chances are if you’re reading this right now it’s because you have been on a mission to find “The Book of Wealth” by Hubert Howe Bancroft…a book you may have just now heard about, am I right?

Maybe you’re like me and you’ve know about The Book of Wealth for quite some time, desired to own it, but you haven’t been able to find it (it’s extremely rare) or afford the hefty price tag that accompanies it if you did indeed come across it.

I first learned of The Book of Wealth in 2005 when I heard Dr. John F. Demartini (One of the Stars of the hit movie, The Secret) talk about it from one of his wealth building seminars.

I was captivated from the moment he mentioned it and the history behind it.

Here’s the “cliff notes” on the book if you are just now learning about it.

Apparently, Mr. Hubert Howe Bancroft wrote this book in 1895. And at the time of its publication, only 400 copies were produced. Each of these copies were then distributed to the 400 wealthiest families on the planet.

That’s right, up until now, the only people who have owned this book are the Ultra Rich…the Global Elite…the ones that some people refer to as “The Illuminati”.

You see, on 21st February 1898, Hubert Howe Bancroft placed this advertisement in the New York Times promoting his infamous 10 volume book. This detailed analysis of wealth creation sold at a cost of $2,500 per copy for the first or cygne noir edition. The second or fin de siecle edition cost $1,000 per copy. By today’s standards, The Book of Wealth would cost a staggering 25 times as much as it did back in the late 1800′s! …adjusted for today’s inflation, this book would cost you almost $63,000!!!

Bancroft’s works were advertised as:

When Hubert Howe Bancroft originally published The Book of Wealth, in 1895, it was priced far beyond the reach of ordinary people like you and me. Sold at that time for as much as $2,500 for a limited-edition set, the only people who could afford the books were those individuals and families who had already joined the ranks of the wealthy…

The information revealed within the pages of the rare volumes was not meant to be seen by the everyday man.

For years, the only way to gain access to The Book of Wealth was to be born into one of the wealthy families privileged enough to possess a set of these scarce books.

Passed on from one generation to the next, only rarely did one of these priceless sets of books find its way onto the rare book market, only to be eagerly snapped up at great cost by a savvy collector… most likely himself a person of considerable wealth.

Now, 117 years after the original publication of The Book of Wealth, I’m offering you the opportunity to join the ranks of the privileged few. You’ve been granted a chance to learn the ancient wisdom contained within The Book of Wealth.

The Book of Wealth examines the history of the wealthiest individuals, families, dynasties and empires throughout recorded history. Read their stories. Study their methods. Learn their secrets.

What better way could there possibly be to achieve great things than to model the behavior of the greatest wealth builders throughout history!

As I said earlier, only limited numbers of this rare book were ever published. This naturally increased the scarcity of the book.

Such paucity (or small quantity) has also intensified the mystery surrounding the contents of The Book of Wealth. Whenever copies have come up for sale at auction, there has often been fierce bidding. Despite being first printed in 1895, the vast majority of the public have not had an opportunity to read these wealth building secrets.

Consequently, The Book of Wealth has been confined to the richest individuals and families.

The Book of Wealth was distributed to the world’s 400 wealthiest families. Families like the Rothchild’s, the Rockefellers, the Morgans, the Vanderbilts, the Kennedy’s, the Fricks, the Carnegies, the Fords, etc…the list goes on.

Up until recently, the chances of you ever acquiring this fountain of knowledge and wisdom on wealth building was slim to to none. …the ONLY way you could have acquired this secret knowledge was for you to pay a minimum of $63,000 for a single set of books

…and you would have to wait for this book to become available on auction, as only 400 copies were ever produced.

And believe me when I tell you…The Book of Wealth RARELY comes up on auction!

Now is your chance to own the book that has brought these families untold amounts of wealth and fortune.

Why Is The Book of Wealth The “Next Big Thing” For You?

The biggest reason why this is your biggest opportunity to build wealth beyond measure is because hardly anyone knows about The Book of Wealth and the wealth of knowledge and wisdom contained in it’s pages.

It is just for the chosen few who find this website.

Building vast amounts of wealth through the Principles taught in The Book of Wealth has never been shared with anyone outside the Global Elite’s Inner Circle.

This book will give you the opportunity to rise in the ranks and become independently wealthy, more powerful and influential. This is the opportunity your lifetime, so don’t let it pass you by.

Now you have all the opportunity to discover the brilliant wealth building strategies contained in The Book of Wealth.

You’ll learn the exact same wealth building strategies used by those who are sitting at the “top of pyramid”.

Now, you may wonder, “How can a set of books that were published more than 100 years ago still be relevant today?”

You’ve no doubt heard this before — “Knowledge is Power.”

The ten volumes of The Book of Wealth contain the accumulated knowledge of the ancient wealth builders, going back thousands of years and extending all the way up to the brink of the 20th century.

The books tell the stories of the people, kingdoms, dynasties and empires that attained great wealth…

How and why they did what they did to accumulate wealth.

How they wielded the power that great wealth can bring.

And which of their methods increased their stores of wealth and which behaviors led to the downfall of once-great empires!

Don’t wait another minute. Act Now! …you’ll be glad you did!

The Book of Wealth 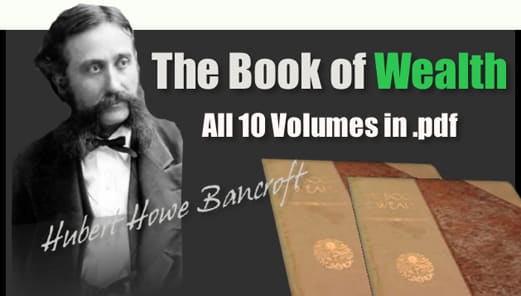 The Book of Wealth has been officially reproduced in .pdf format. The complete set…ALL 10 Original Volumes!! Every single page — all 1,000-plus of them — has been digitized — every word of text and each one of the thousands of original illustrations — and compiled into 10 separate PDF format eBooks…

Ready for you to download instantly onto your home or office computer so that you, too, can now have unlimited access to the wealth secrets of the ages.

The Book of Wealth is the ultimate product of Hubert Howe Bancroft’s lifelong quest for wealth building knowledge.

The Book of Wealth was originally produced in a very limited edition, and available only to the wealthiest families and individuals around the world, this incredible set goes back through recorded history — beginning with the Sumerians, the Egyptians and Babylonians — and explores the wealthiest individuals, institutions, organizations, religious foundations and nations that have ever built great wealth.

Tracing the creation, acquisition and movement of wealth from the earliest civilizations to the dawn of the 20th Century, The Book of Wealth analyzes what the wealthy did and how they did it. What was their mindset and what was their motivation for accumulating great wealth?

An absolute must have for any person who is interested in building great wealth and power!

Earnings Disclaimer: We don't believe in get rich programs - only in hard work, adding value and serving others. Our programs are intended to help you share your message with a wider audience and to make a difference in the world while growing your business. As stipulated by law, we can not and do not make any guarantees about your ability to get results or earn any money with our ideas, information, tools or strategies. We don't know you and, besides, your results in life are up to you. Agreed? We just want to help by giving great content, direction and strategies that move you forward, faster. Nothing on this page or any of our websites is a promise or guarantee of future earnings. Any financial numbers referenced here, or on any of our sites, are simply estimates or projections, and should not be considered exact, actual or as a promise of potential earnings - all numbers are illustrative only. Anyway, all of our terms, privacy policies and disclaimers for all of our programs and events can be accessed via the link below. We think these disclaimers are important and we post them because it's the right thing to do. Thanks for stopping by. Until next time, live fully, love openly, and make a difference today. Contact Email: Earning Discliamers, Privacy Policy and Terms

Copyright 2020 - Buy The Book of Wealth - All Rights Reserved